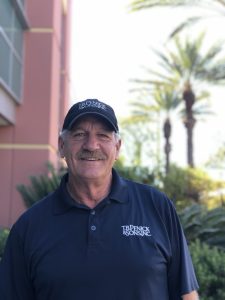 Rich Robertson has 47 years in the concrete industry and still learns something new every day. Well known throughout the San Diego construction community, he is an irreplaceable member of T.B. Penick &amp; Sons.

Rich began his career in the concrete industry in 1972 as a laborer. Over the next 10 years he moved from a laborer to a finisher and cement mason. He completed his union apprentice ship program as a cement mason in 1979, and worked through the ranks at T.B. Penick, becoming a foreman in the
early ’80s. He managed 11 crews throughout the next five years, and became a concrete superintendent in 1985, supervising six crews over the following five years. From 1990 to present, he has operated as the general superintendent for T.B. Penick &amp; Sons’ Decorative Concrete Division. He has been involved in ACI, AGC and ASCC, and hundreds of projects throughout the years.

On any given day you can find Rich on multiple Penick job sites solving problems and working side by side with field employees, owners, architects and, of course, office management. His time as a laborer and foreman has helped create an ability to find unique solutions to forming and other real-time
issues. His hands-on experience provides a knowledge base and understanding of the on-site trials that you can only achieve through years of effort. He has the great ability to take a roadblock and turn it into something beautiful.

Some of the more notable projects in which Rich has been a key player are:

Learn from Rich at the Concrete Decor Show