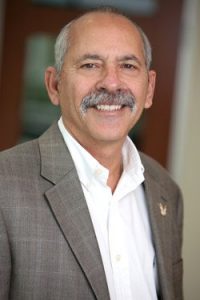 A detail-oriented and scheduling expert, Byron works closely with architects, designers and owners to ensure each project receives the artistic supervision needed during each phase of the job. He keeps projects moving and optimizes his team’s performance. Byron was instrumental in Penick becoming a National Terrazzo and Mosaic Association (NTMA) member.

After nearly five decades in the business, Byron remains passionate about the concrete industry. Recently, he helped T.B. Penick secure a federal patent for a pervious concrete system called Pervious Concrete Elements and a process patent for an exposed imprinted system. Always an innovator and visionary, Byron continues to push himself and inspire the industry to evolve in terms of sustainability, functionality, new products, new uses, new finishes and new concepts of architectural and design beauty.

In July 2015 in its 100th commemorative issue, Concrete Decor magazine recognized Byron as one of the Top 10 Influential People in the industry, stating “When people seek advice concerning the decorative concrete industry they often turn to Byron Klemaske II, a widely recognized authority and innovator in the business with more than four decades of experience to his credit.”

Learn from Byron at the Concrete Decor Show